When is the church going to figure out that when it broadcasts messages of hate, nobody wins? Not God, not Christians, and certainly not anyone else.

For some reason, though, every time a morally-charged news story breaks, I find myself bracing for the hate-filled response from some embarrassing corner of Christianity. When the DOMA story hit the news a few days ago, almost simultaneously alongside Wendy Davis’ marathon filibuster in Texas, I was actually shocked not to see any outrage at the latest Christian-initiated backlash exploding on my Facebook wall. It may have been there, but it was drowned out by all the celebration.

You don’t have to be Facebook friends with George Takei to know that the general tide of opinion about homosexuality in American society is shifting. Rainbow is the new cool, homophobia is the new racism. But am I just “jumping on the bandwagon” and “selling out” my faith by failing to reach for a “God hates insert-hated-minority-group-of-the-day” sign (1) every time society slides further down the so-called slippery slope?

I don’t think so. As a Canadian, the gay marriage debate has been long since settled for me. Gay marriage has been legal all across the country since 2005, and we were technically the first country in the world to have a legally-recognized gay marriage occur (2). America’s Hat has painted itself rainbow-coloured, and while we’re admittedly not very forward-thinking in many other arenas (Global warming? What’s that? Sounds like a good idea, because brr!) at least in this we seem to be.

As a Christian, figuring out where I stand on the issue had been a more difficult process of wading through grey areas trying to find my way; difficult largely because of all the confusing messages I’ve received about what the Bible supposedly says about homosexuality. It was always a faceless issue for me, though, until early 2006 when I discovered that one of my best friends from youth group had finally come out of the closet. My first thought was not one of judgment, or fear, or concern for his eternal soul, but one of mortal embarrassment at the fact that I had – just weeks earlier – jokingly given him a Mrs. Potato Head for Christmas. When faced with the issue I knew instinctively that the only thing that mattered was for me to continue to love my friend as I always had, and that settled it for me.

In the last few years, living abroad, I’ve had the opportunity to become a part of a very diverse expat community. I’ve made friends with many different origins, beliefs, and yes, sexual orientations. Many of these friends are surprised to learn I consider myself a Christian because I seem so “UN-Christian.” What does this even mean? Is this bad? Well, in some of their words, I’m not “judging them,” I’m not “like those crazy fundamental types,” I don’t “seem so religious.” Sometimes I am asked if I hate [insert-LGBT-friend’s-name-here] because I’m a Christian. Sometimes I find myself listening to a friend’s story about how they’ve been hurt or turned off by the church in some form or another. I’ll respond earnestly and honestly, or jokingly and sardonically, depending on the situation. But I cry a little inside every time.

So I ask, tearfully, why are there so many people who have been hurt by the church? What’s the deal with all the hateful messages aimed at very select groups of people? Why do churches picket against legalizing gay marriage and not legalized divorce? Jesus has much clearer and stronger words for people who divorce (3)  than for homosexuals. In fact, he barely says anything about homosexuality at all. (4)

Wouldn’t it seem absurd to picket the homes of everyone who’s ever gotten a divorce? If we did, we would have to picket the same percentage of church members as members of the general population, since the numbers are nearly indistinguishable. (5)

Don’t misinterpret me, though. Before you reach for your signs and pitchforks, I am not suggesting we find new things to protest. As Rachel Held Evans writes, “My generation is tired of the culture wars. We are tired of fighting, tired of vain efforts to advance the Kingdom through politics and power, tired of drawing lines in the sand, tired of being known for what we are against, not what we are for.”

When Jesus was asked, “what is the most important commandment?” He didn’t say, “make sure those gays and those Jews and those democrats know what’s coming to them.” He summed up all of the Bible’s commands in one sentiment: love. Love God, love others. Period. (6) 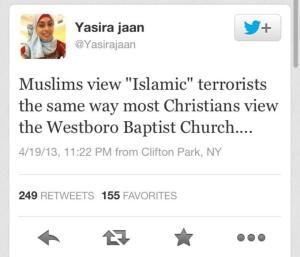 I know that not all Christians are the Westboro Baptist Church, and that there are a lot of Christians out there trying to live authentic lives of love. Yet for far too many people the whispered message of love is not being heard above the angry cries of hate.

(1) – There is actually a website, believe it or not, dedicated to exactly this.

(2) – While Canada was technically the fourth country to legalize gay marriage, in certain provinces in 2003, and then federally in 2005, a retroactive court decision made a January 2001 wedding the first legally recognized gay marriage in the world. (wikipedia)

(4) – What did Jesus have to say about homosexuality? Hint: not much.

(5) – A Barna Group study found, in 2008, that divorce statistics among Christians in America, as compared to the general American population, were “statistically identical.”