I’ve done it before and I’ll do it again.

The other day, after no small amount of anticipation and deliberation, I cut off my womanhood.

Because for women, the symbol of our womanhood is not so much a bodily organ as it is our hair. So what happens if, as women have become more and more liable to do, we cut off that precious symbol? What do we become?

For years, centuries and probably even millennia, long hair has been a desirable and prized symbol of a woman’s beauty, fertility and femininity, and short-haired women have been eyed with suspicion or disdain. Just try Googling “women with short hair” or “women with long hair” and you’ll see there’s still a lot of people with very strong perspectives on the issue.

Good thing there’s lots of awesome guys out there willing to overlook this apparent predisposition for the sake of their love interests’ other redeemable qualities (thankfully, my husband is one of them). Ironic, though, isn’t it? While a less-than-charitable stereotype of men today says they only care about one thing – that is, the biological equivalent of what they perceive to be their “manhood” – the hair issue shows that they care about at least a bit more.

I remember clearly the time my aunt threatened to chop her almost hip-length hair, to teach my uncle a lesson. We were on a camping trip, and while I don’t remember what he had done or why she was angry, I do remember his reaction vividly. He scoffed arrogantly, saying she’d never do it, that he didn’t care, trying unconvincingly to call her bluff. So we retreated – my aunt, female cousin and I – into her trailer, and did the unthinkable. We tricked him. Armed with a pile of bobby pins, a can of hairspray and a pretty hat, we gave her a rather convincing “haircut.” The look of horror on his face when we presented her to him easily betrayed his true feelings, and gave my aunt the satisfaction of revenge without actually having to do anything drastic. 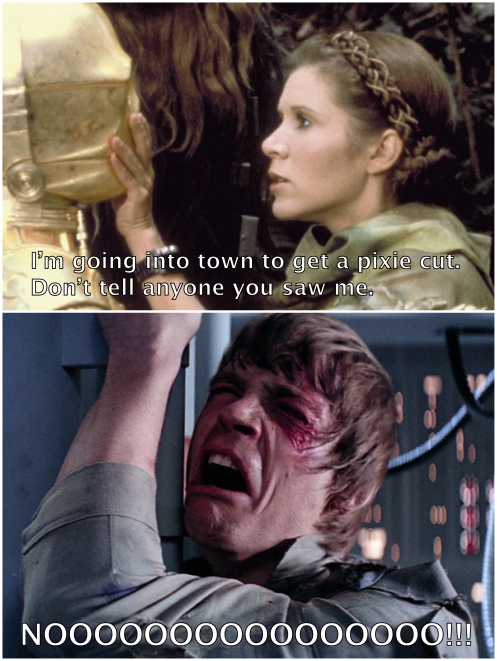 Over a decade has passed since that camping trip, and although the general male preference for ladies with long hair may not have changed, a lot else has. The fashion industry, often criticized for promoting unrealistic ideals of what women should be, in some ways has led the charge by putting short-haired female models on the runway and on magazine covers.

A friend of mine, Janice Alida, is a rising star in the fashion world who has modelled for everyone from Marc Jacobs to Vogue. Early in her career she shocked a lot of people by chopping her beautiful, long blonde hair in favour of a pixie-short, so-called “boyish” look. And according to some fashion industry pundits (Janice Alida: From Nada to Prada), this bold decision likely had a lot to do with her rise in the industry.

I asked Janice recently how the experience of going short felt to her. Here’s what she had to say:

The general idea to cut my hair shorter was my idea, but my agency then presented the bleached pixie cut style to me. I took a few days to let it sit, and in the end, I didn’t really feel scared by the idea, so I decided to go for it without thinking much about what I’d be losing. (Keep in mind that I also did it for my job, to see if it would bring me into a new direction in my career, so I had some extra motivation for the big jump rather than strictly my appearance). During the cut itself I didn’t feel too nervous, but I was just really anxious to see how it would look on me because I’ve never had short hair before.

I think people thought the chop was a bit gutsy, because I’d had long, natural blonde hair my entire life. There was definitely no lack of support, though. Looking back, I’m really pleased that I chopped it all off because it’s created a freedom in changing my hair that I didn’t have before. I really respect people who enjoy taking risks with their hair. The changes are a lot of fun and I enjoy going through each phase of growth, and I’m open to almost anything in the future that my job might bring or that I might feel like doing personally.

I can definitely relate to her experience – minus the famous model bit.* The first time I cut my hair short was in high school, for a drama production I was a part of. It was my idea but the director agreed and even encouraged it, as it helped to accentuate my character in the play. And so my hair went from long, straight and blonde, to short, spiky and pretty much Goku. (*Admittedly I did get in the local paper, so I suppose I was a little tiny bit famous for at least a day).

Cutting my hair short coincided with a lot of other positive changes in my life at the time. I went from being a shy, overly self conscious girl afraid of the world to a confident, adventurous one ready to give the world my best. It wasn’t an immediate internal change that happened in the stylist’s chair, but the haircut definitely had something to do with it. Going short was a very freeing experience the first time, and has been every time since.

Have you ever made a drastic change in your appearance, hair or otherwise? How did others react, and how did you feel? Are you considering any gutsy changes at the moment?

18 thoughts on “Cutting Off My Womanhood”